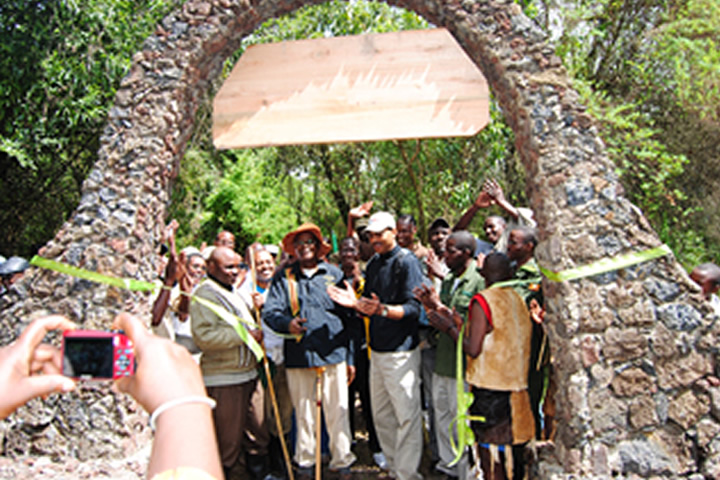 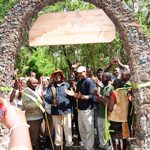 The Uganda Wildlife Authority has commissioned a shorter version of the Batwa Cultural Experience Trail in Mgahinga National Park, south western Uganda, which will offer tourists a chance walk through the cultural sites and footsteps of the first forest people.

The revamped trail leading to the famed Garama cave an over 200 meter long lava tube which served as council chambers, residence, stores and armory for the last king of Batwa was made possible with the support from US Mission in Uganda trough USAID which has invested $31,000 to train Batwa people to serve as guides and improve lighting, walkways an shelters along the trail. These new features are expected to add $12,500 a year to the tourism revenue with 50% of it going to approximately local residents.

Presiding at the official launch of the shorter trail, the Uganda minister of Tourism, Wildlife and Heritage Professor Ephraim Kamuntu could not hide his excitement by remarking that “the tourism product is unique, rare and the only one of its kind and whoever experiences it should share the memories with the rest of the world”

Professor Kamuntu who walked the entire 5.6km trail trough the dense forests of Muhabura ranges hosting troops of Golden monkeys and mountain gorillas, also observed that the product is an epitome of conservation in its original form. It is a bridge between the past, present and the future”.

The minister, flanked by the USAID acting Mission Director, John Mark Winfield, was particularly impressed by Batwa demonstrations on old methods of making fire by rubbing two dry sticks against each other, harvesting of honey using smoke, fetching water using bamboo tubes among others. He however urged the Batwa community not to remain living in the past by making efforts to educate their children to discern myths from reality using modern science.

“Do not be prisoners of your past—balance between continuity and change as there is no culture that can survive without merging with modern trends,” he challenged the Batwa community.

Mr. Winfield the acting USAID Mission director said Uganda was blessed with amazing natural resources and attractions which should be made known to the rest of the world. He said the American people were proud to be associated with this development that promotes tourism while preserving the culture and improving the community livelihood.

He added “Through our partnership with the ministry of Tourism and Uganda Wildlife Authority, we are in a unique position to help preserve the natural beauty of this country while supporting the tourism industry so vital to Uganda’s development. We hope the new additions to the trail will attract more tourists to the park ad give Uganda a competitive edge in the global market.”

Mr. Stephen Masaba, the acting Director Tourism and Business Services who represented the Uganda Wildlife Authority Executive Director, Dr. Andrew Seguya, said the new product was in line with the organization’s strategy of diversifying tourism products to attract more visitors to the protected areas and keeping them longer. He hailed the partnership between UWA, Kisoro District Local Government and the United Organization for the Batwa Development in Uganda (UOBDU) saying it has greatly reduced the Human-Wildlife Conflict in the region. He also urged the international community to enjoy other tourism products offered by the Mgahinga National Park including the volcanoes hiking, Golden Monkey tracking, Gorilla Tracking, Forest Walk and caving.

Earlier, the manager Bwindi-Mgahinga Conservation Area (BMCA) Mr. Pontious Ezuma, gave the chronological background of the Batwa Trail development, the revenue sharing arrangements and the role of partners In maintaining the new product.

Is Gorilla Trekking in Uganda Worthy the Money? January 17, 2022